- a solution for viewing virtual slides and integrated analysis. 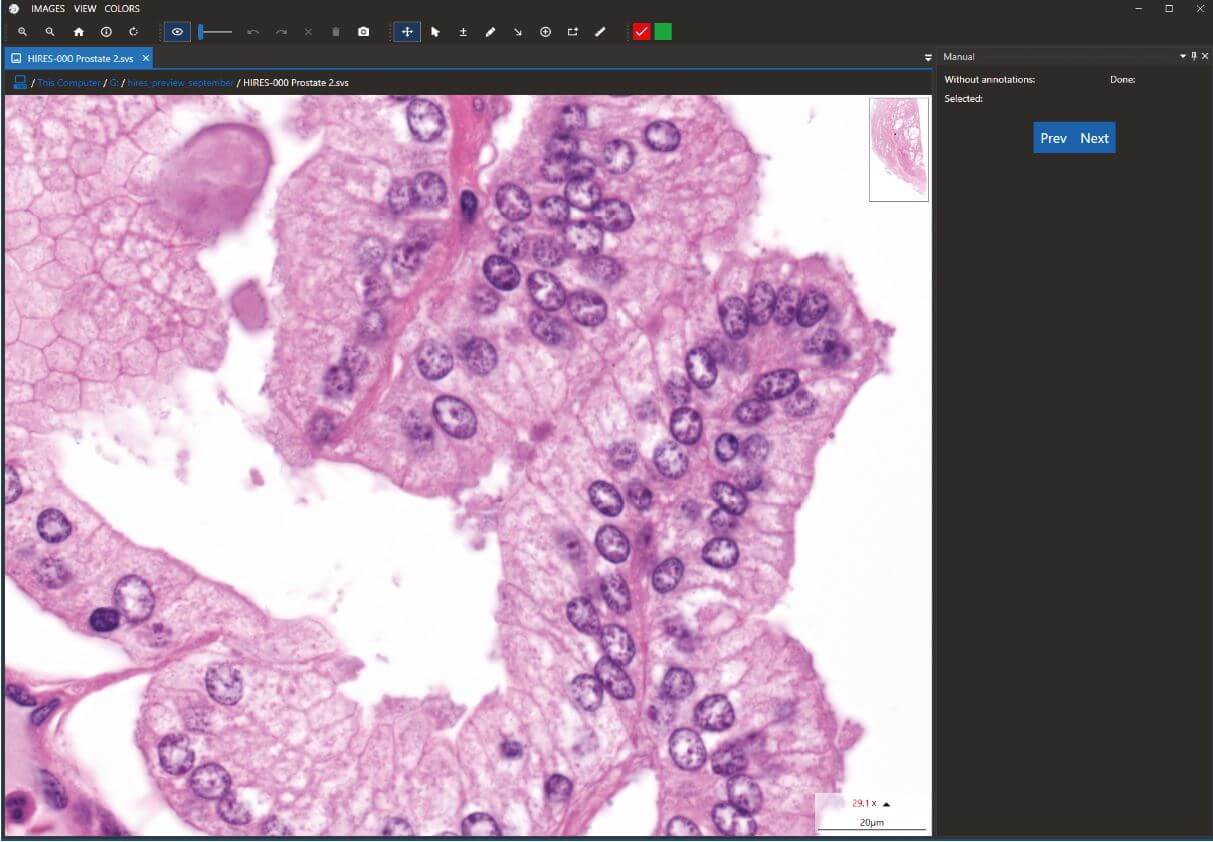 Screen shot from SeeMore Screenshot of SeeMore! viewing a high-resolution scan of prostate cancer from our HighRes scanner.

In most of our projects, we scan several slides for every case in the project. In order to view these scans in the best way possible, we need an easy to use, fast and general application that works for scans from different scanner manufacturers. There are several commercially available viewers, but they are missing important features for visualising results. To meet the demands of current and future projects, we are now building a new scanner called SeeMore!

Our current viewer, InterPath, has become a commercial product through Room4 Group Ltd, and another viewer is therefore required for ICGI. Another viewer must meet several new requirements, for example, different tools as a part of the viewer, such as heatmaps and mitotic index. Tools like these should be added as new plugins, and it must be easy to add new tools at a later stage. We need a viewer that may be integrated into other products, both our own, such as Histotyping and external products and systems, such as the DIPS system.

The viewer will be built from separate components, providing distinct areas of functionality, such as:

We have called the new viewer SeeMore! and it will take advantage of these building blocks. Still, it will extend the user interface with a multiple document interface and a new graphic design to provide a different “look and feel”.

The new design will give the user freedom when it comes to colour and layout. All windows can be repositioned, resized, and docked so the user can focus on the task at hand, and there is a choice of over twenty light and dark themes.

To support working with many images, SeeMore! provides a worklist that tracks all the images. Each image can be marked with a state (Unhandled/Use/Ignore), making it easier to keep track of work progress.

And of course, SeeMore! always remembers where you were the last time you used it and reopens everything so you can pick up where you left off.

SeeMore! contains a plugin-architecture that lets us extend its functionality by adding new plugins. These plugins can be classic image processing tools or tools based on neural networks and AI. To begin with, we provide three plugins (tools):

In addition, new plugins will be developed to extend the functionality according to the different ICGI projects’ needs, such as our HighRes scanner. Plugins will also be created for analyses using stroma, ploidy, nucleotyping and Histotyping.