Our group has published several studies linking chromatin organization with patient diagnosis and prognosis. In these studies, the method applied to analyze the chromatin organization was based on local gray level entropy. The entropy measures the non-uniformity or degree of scatter of the chromatin pixels within a window size of w x w pixels, which could be interpreted as how disordered the chromatin organization is within the local window. Large, similarly condensed chromatin structures will give low entropy values whereas small chromatin structures of different condensation will give high entropy values. The entropy is coupled with measurement of DNA density (the grey level) to form the gray level entropy matrix (GLEM); the figure describes the algorithm. The GLEM element P(i,j) contains the estimated probability of an entropy value j within a window of a given size w centered around a pixel with gray level value i.

The parameter w determines at which scale disordered chromatin organization should be measured in the resulting GLEM. By varying the value of the parameter w, several entropy GLEMs may be computed. Combining these GLEMs and adding nuclear area as a separate axis provides a four-dimensional matrix termed 4D GLEM. This texture matrix is the basis of several of our studies. 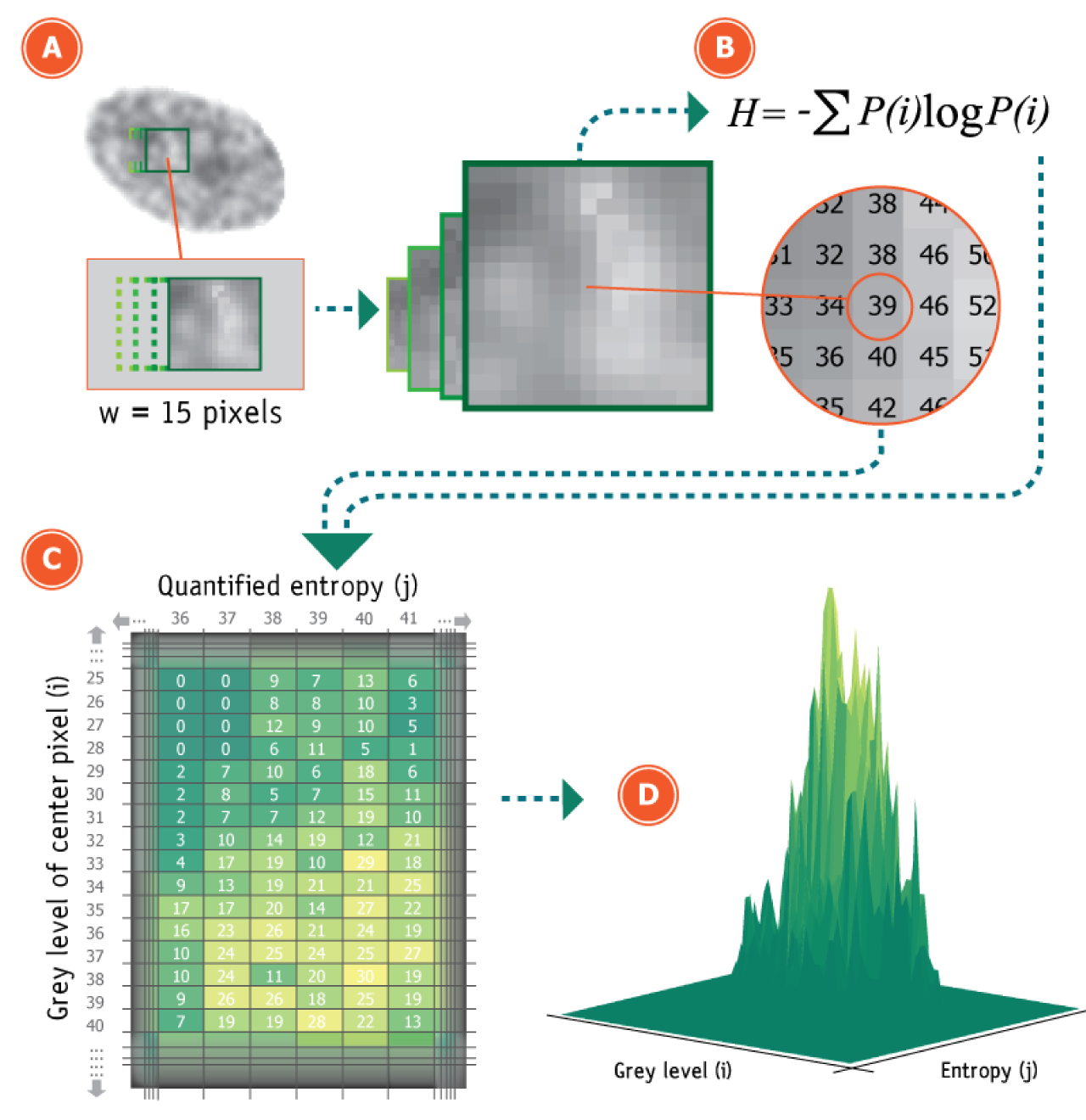 Calculating GLEM 1. A window with a given pixel size (ie. 15x15 pixels) is centered on each pixel in the image. 2. For each position in the image, the gray level value (i) is deduced from the center pixel of the window. The gray level entropy value (j) is calculated using the formula shown. 3. i and the scaled j are used as index in GLEM, and the occurrence of the various entropy patterns (i,j) accumulate. 4. In the last step, the GLEM is normalized by dividing each element in the matrix with the total number of pixels in the nucleic image.

We have defined nine textural features based on local entropy values, which may be extracted from the gray level entropy matrices. Each feature is based on a weighted sum of the entropy matrix elements. The entropy features give an estimate of the gray-level disorder in different sizes of pixel neighborhoods. We have determined that the entropy-based textural feature is useful as a prognostic tool in metastatic prostate cancer. Our group has also published several studies linking chromatin organization with patient diagnosis and prognosis.

In order to analyze the chromatin structure close to the nuclear membrane, we have used a spiral scanning algorithm which we call "peel-off scanning." This is a straightforward venue to extract separate estimates of textural features in the periphery and center of nuclei. In several studies, we have observed a radial differentiation of texture features within the nuclei.

To summarize the diagnostic or prognostic information in a GLEM or a 4D GLEM into a single continuous value, we have developed an extraction method that automatically learns the relevancy of each matrix element from a set of discovery images. This approach outperformed classical pre-defined features when applied to the most difficult set of 45 Brodatz texture pairs (which are often used for evaluation and comparison of texture methods). In our texture analysis studies, the adaptively extracted feature was further simplified to a dichotomous classification of the patient as have good or poor prognosis using a conventional classification method known as minimum Euclidean distance.