The Institute’s research is mainly focused on the following cancer types:

Prostate cancer is the most common cancer form in men in most countries of the western world. The disease development varies, and it can take up to twenty years from when cell changes start via prostatic intraepithelial neoplasia (PIN) and indolent (latent) cancer and develop into clinical cancer.

The tumor types of prostate cancer differ in levels of malignancy. Therefore, the treatment schemes differ from no treatment to comprehensive multimodal treatment. To achieve optimal treatment results, it is important that these patients are evaluated by multidisciplinary teams including an urologist, oncologist, radiologist, and pathologist.

During the last 10–20 years, PSA, or prostate specific antigen, has been used for early detection of prostate diseases, including cancer. This has often led to detection of cancer at earlier stages during the course of the disease. The PSA level, measured by a blood test, is often high in the presence of prostate cancer. However, a high PSA reading is not specific for cancer.

There are many controversial aspects in the treatment of prostate cancer.  One of the questions is whether to detect the disease early by PSA-screening or whether the disease’s natural, untreated course is benign enough that curative treatment of early cancer with it’s subsequent serious side effects is unethical.

We are currently working with the following clinical materials:

Tumor samples from these patients are analysed for large scale genomic instability (DNA Ploidy & Nucleotyping), as well as for a number of candidate genes and their products (using FISH, NanoString technology and IHC), searching for better methods of prognostication. Subsets of these materials are also in use in the 3D-project and with MicroTracker.

Colorectal cancer (CRC) is the fourth most common cause of cancer-related death worldwide.

Although surgical resection alone is often curative, some patients with apparently localized disease at presentation remain at significant risk of relapse. Pathological staging systems are the current standard for predicting outcome of CRC, but it is evident that tumors are genetically and biologically heterogeneous within each stage and there is a great need for new and better methods for prognostication of these patients.

The colon/rectum consists of:

In the embryo, the rectum grows from the abdomen into the pelvis. During this development the surrounding intestine and fat tissue (mesorectum) also “pulls down“ the covering fascias found in the abdomen. These fascia layers are very important for the dissection plane in localized rectal cancer.

For reasons of treatment diagnostic staging separates between:

About 98% of all cancer tumors in the colon/rectum are adenocarcinomas. The rest are spinocellular carcinomas, carcinoids, lymphomas, and sarcomas. The tumors are often localized in the ascending colon, sigmoid and rectum, and rarely in the middle part of the colon.

We are currently working on the following clinical materials from colon/rectum:

Tumor samples from these patients are analysed for large scale genomic instability (DNA Ploidy & Nucleotyping), as well as for a number of candidate genes and their products (using FISH, NanoString technology and IHC), searching for better methods of prognostication. Subsets of these materials are also in use in the 3D-project and with MicroTracker.

Cancer of the female genital tract is the third most common group of malignancies in women, exceeded in frequency only by cancer of the breast and of the digestive tract.

Most of the cancers are of the ovaries and uterus, and these are the ones we are focusing on.

The stage of the disease at the start of treatment is significant for the prognosis. The amount of tumor that remains after the operation, as well as the grade of differentiation and histologic type of the tumor tissue, is also of significance for the prognosis. In stage I, the histological type, grade of differentiation, and ploidy are highly significant. Based on these parameters, tumors are separated into low and high risk groups:

Endometrial cancer and Sarcoma of the uterus

Uterine cancer includes cancer occurring in the body of the uterus.

These cancer types are:

Endometrial cancer originates from the mucosa of the uterus.

The most frequent type of cancer originating in the uterine mucosa is endometrioid adenocarcinoma, designated as type 1 endometrial cancer. Type 1 endometrial cancer appears in perimenopausal women. These tumors are related to increased and long-standing estrogen stimulation. In general, endometrioid adenocarcinomas have a good prognosis, but poorly differentiated (grade 3) tumors have a less favorable outcome, comparable to that for type 2 tumors. Type 2 endometrial cancer is usually seen in older postmenopausal women (usually > 60 years of age) without any sign of long-standing estrogen stimulation, and mainly consists of serous papillary adenocarcinoma and clear cell carcinoma.

Correct subtyping of endometrial carcinoma requires well-trained pathologists with adequate experience in the field. Additional methods are sometimes necessary to correctly diagnose these tumors, such as immunohistochemistry using antibodies against p53, estrogen receptors, ploidy and others.

The most common types of sarcomas are; leiomyosarcomas and endometrial sarcomas, but all soft-component sarcomas can occur in the uterus. Sarcomas have a biology completely different from carcinomas. The largest difference is that sarcomas almost never metastasize to lymph nodes, but metastasize via blood. They have a great tendency to implantation in the peritoneum if spilled. This is a critical point during surgery. Gynecological sarcomas may occur in women of all ages and comprise about 5% of all uterine cancer. Among these, leiomyosarcoma amounts to about 60%, while endometrial stromal sarcoma and adenosarcoma, comprise 20% and 6%, respectively.

Every 10th woman will develop breast cancer during her lifetime.

In Norway, there were 2,956 women who received this diagnosis in 2012.  In comparison, the disease affected 1,235 women in 1970. Breast cancer affects first and foremost women over the age of 50. Only 5.6% of new cases occurred in women under 40 years in 2004. The disease constitutes 40% of all cancer in women between the ages of 30 to 54 years. The average age at diagnosis is 59. The risk increases with age, but isolated cases occur in women under 30 years of age. 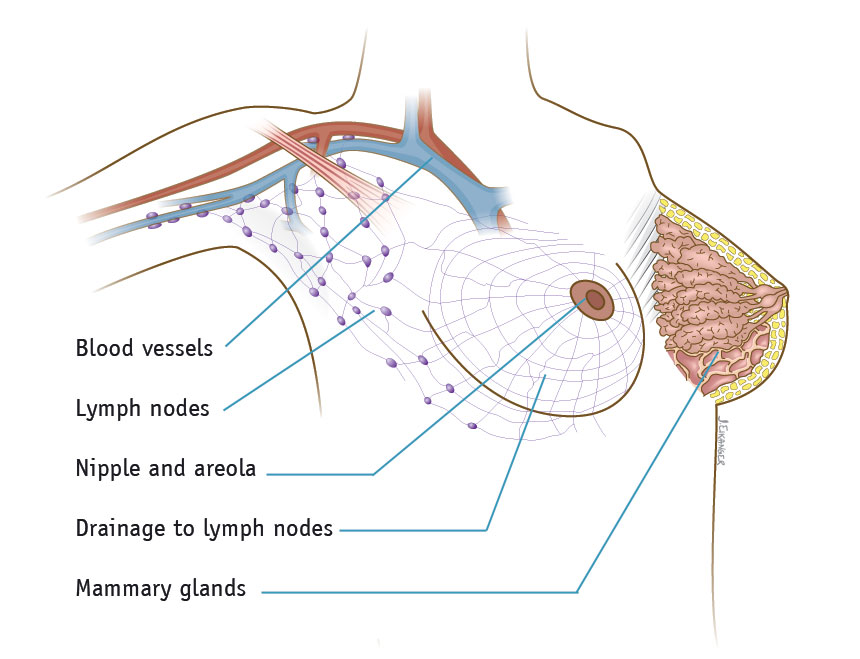 Breast cancer is by far the most common form of cancer in women. The disease is characterized by a varied course, from rapidly growing tumors with early distant metastasis, to slow growing tumors which remain in the breasts without metastasizing. Twenty-five to 35% of breast tumors are aggressive. The majority of breast tumors are carcinomas. Sarcoma tumors are rare, but are important to be aware of as they are treated differently from other breast carcinomas.

Survival after diagnosis and treatment has continually improved over many decades. This is in part due to increased use of mammography screening, which provides early detection of the disease, and improved treatment. Approximately 2/3 of patients are cured of the disease. Five year survival without a sign of relapse, all stages considered, is more than 80%. In 2004, 694 women and 3 men died of breast cancer in Norway. Of these, 423 were over 65 years. Breast cancer is the most important cause of lost years of life in women under 65 years and ranks before both heart/vascular diseases and accidents. At the end of 2005, there were 31,548 women with the diagnosis.

Early diagnosis is, despite great differences in biology, the most important means of improving the prognosis. The prognosis is also strongly dependent on stage. Five year relative survival where the disease is limited to the breast is 94.1%, compared to 16.9%, if there is distant metastasis at the time of diagnosis.

Premalignant lesions are recognized microscopically by abnormal proliferative activity (cell growth) in the ductal system or in the glands (lobular), but where there are no signs that the epithelial cells have penetrated the basal membrane. The lesions can be classified according to proliferation, cellular atypia and tissue architecture as shown below:

DCIS, also known as intraductal carcinoma, should not be confused with invasive carcinoma of the ductal type. Previously, DCIS was considered a rare condition and constituted only between 1.4 and 5.3% of all newly diagnosed breast cancer cases. After the introduction of mammography screening, more women are diagnosed with DCIS (10-30%).

In areas with established mammography screening programs, DCIS constitutes 25-30% of new breast cancer cases in the first screening round. In later screening rounds, the number is 10-20%. The main problem with DCIS is that the risk for local recurrence in the breast after resection alone is much greater than with other pre-malignant lesions in breast tissue. In addition,a large majority of DCIS will not develop into invasive carcinoma if left untreated. For this reason, there is a great need for dependable prognostic markers.

Metastases from neoplasms outside the CNS are far more common than primary, intracranial neoplasms, but the yearly incidence of the latter is rising. Tumors of neuroepithelial tissue in general and gliomas in particular are the most frequent primary tumor entities and in general carry a dismal prognosis. Too little is known about how they arise, i.e., about which genomic changes bring about neoplastic transformation of cells rendering them tumorigenic. The Section for Cancer Cytogenetics therefore studies the genomes of gliomas and other brain tumors using a combination of screening techniques (karyotyping and comparative genomic hybridization; CGH). When abnormalities of particular interest are found at the chromosomal level, we may choose to examine these in more detail using molecular genetic methods. The genomic findings thus revealed are correlated with other biological and clinical parameters. The aim is to obtain both more pathogenetic understanding of the different tumor categories and to work towards a new grouping of intracranial tumors that has better prognostic information value than what is offered by current phenotypic classifications.

Among PhD students working on, or previosly having worked on, this project are Hanne-Sofie Spenning Dahlback who studyed genomic changes in brain tumors, first and foremost gliomas. Cell culturing of neoplastic cells followed by G-banding and karyotyping and chromosomal and array-based CGH were the main methods used in her project “Cytogenetic and molecular cytogenetic analysis of brain tumors”. Annette Bentsen Håvik studied epigenetic parameters such as the methylation of the MGMT promoter as well as glioma gene expression. The latter studies aim at correlating the espression profile with the genomic characteristics of different glioma subrypes. Thale Olsen researches genomic characterization of ependymomas.

The esophagus stretches from the pharynx in the throat down through the thoracic cavity to the stomach and functions as a transport organ for food.

The length from the throat is about 15 cm from the teeth while the length to the stomach is about 45 cm from the teeth. The esophagus is covered with squamous cell epithelium and contains as the rest of the gastro-intestinal tract three layers. In addition to the mucosa, the wall consists of the sub-mucosa separated from the mucosa by a thin layer of muscle (muscularis mucosa) and the outermost muscularis propria with circular and longitudinal muscle fibers. This cancer form has changed character in the last 20 years. Previously, cancer in the esophagus was primarily squamous cell carcinoma. Today adenocarcinomas constitute approximately 50% of all esophageal cancer.

Precursor lesions are classified as squamous cell dysplasia (intraepithelial neoplasia) of low-grade or high-grade type. These lesions can precede squamous cell carcinomas or occur synchronous close to the invasive carcinoma.

Barrett`s esophagus represents as gastric or intestinal metaplasia (transformation of normal type of epithelium). These changes can appear due to reflux of gastric fluid in the distal (lower) part of the esophagus. Dysplasia preferably appears in the intestinal metaplasia of Barrett’s esophagus. The epithelial grading is as follows; negative for dysplasia, indefinite for dysplasia, low-grade or high-grade dysplasia.

Dysplasia in Barrett’s esophagus can develop into adenocarcinoma.

We have received a material of 130 BE patients from University College London. We have shown that both DNA ploidy and Nucleotyping are very promising prognostic markers for patients with BE. (ref)